Last weekend was the last round of the French Superbike Championship at the Paul Ricard circuit. The riders supported by GMT94 had some great successes, but also some disappointments.

Valentin Debise, who has now won the Supersport class, was aiming for the double in the Superbike class. After a technical problem in Race 2 at Carole, and a second in Race 1 at Paul Ricard, Valentin missed the double. The GMT94 Yamaha team would like to congratulate Valentin for his incredible project of leading his double Supersport – Superbike project alone, with so many performances over two seasons in a row.

Martin Renaudin was also the best young rider in the Superbike class. He finished on the podium of Race 1 in the scratch classification and shows his constant progression during this 2022 season.

While V.Debise was focusing on this round in Superbike, Johan Gimbert did the double in Supersport, winning the title of best young rider, and becoming at the same time runner-up of Valentin Debise in the overall classification. Bartholomé Perrin and Enzo de la Vega joined him on the podium in race 1 and race 2. Congratulations to all three riders for these great performances.

In the 300 class, Justine Pedemonte took her first podium in the FSBK, finishing 2nd in race 1. A nice rise in power for Justine.

Special mention also goes to Marcus Delestre, who took part this weekend in the SuperFinal of the Yamaha R7 Cup, which took place at the same time as the WorldSBK. Qualified 4th, Marcus fought in the leading group in Race 2, and demonstrated the excellent level of the French championship. 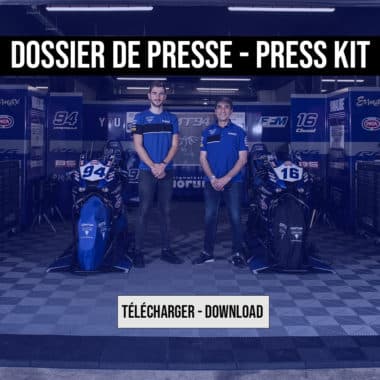